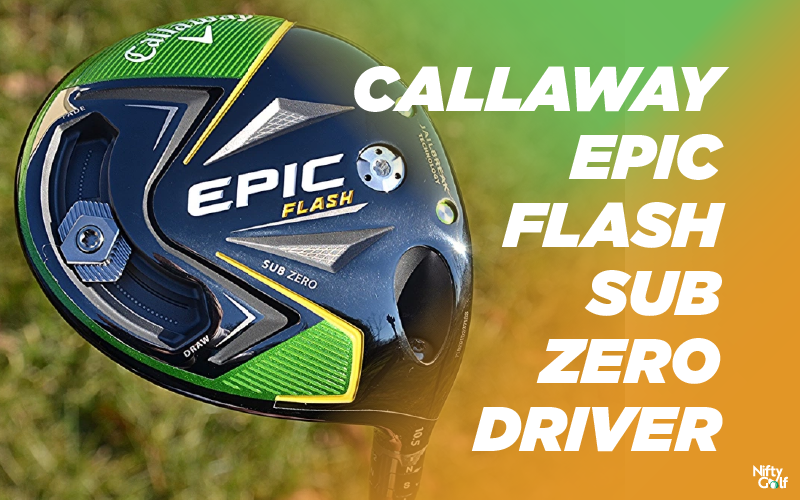 Recently in every year, Callaway launched a new series of drivers, and sub-zero has been a segment in each series. For example in Callaway rogue sub-zero, Callaway epic flash sub-zero and Callaway mavrik sub-zero. Have you ever wondered why? If you have, go through the article and you will get your question answered. In this article, we are going to review Callaway Epic Flash Sub-zero on their features, benefits, looks, and performance and find out the better sub-zero version that would be your best match.


Callaway is the brand that most golfers are familiar with. They are one of those fewest trusted brands in golf equipment manufacturing. They have been consistent in providing quality products year after year. In early 2019, the golf fraternity was surprised with the epic flash series driver launching because it was the first time when a club driver’s face is designed with Artificial Intelligence (A.I.).

And the creation was a very successful one. Epic Flash Driver had been awarded 20 out of 20 stars in the 2019 Golf Digest Hot List. It is the only driver awarded in this segment.

The attachments for shafts and grip that can be used with this Callaway Epic Flash driver enriches its performance. Let’s have a look at the specifications:

Just like the other epic flash, this one also has a green and gold color scheme. It looks great in the green golf course. Side by side, the Epic Flash Sub Zero is much shorter from front to back than the standard Epic Flash. On its back, it has black to carbon fiber fade which looks premium. You might not realize the weights adjusting perimeter as it seems a part of the design and looks great.

Epic flash standard driver is still one of the most satisfying drivers among golfers. Let’s find out the difference with epic flash first then move on to other sub-zero models. The Epic Flash is famous for speed but lacked enough forgiveness if it wasn’t hit right. The Epic Flash sub-zero has a great ball speed and just proper forgiveness. It sits well at the address and has the classic Callaway curved line set back from the leading edge.

It sounds incredible at impact but if you are fond of the impact sound of GBB Epic, then you might not like this one.The Epic Flash Sub Zero driver is much louder than the Mavrik sub-zero and quieter than the Rogue sub-zero. As it is a sub-zero segment built for better spin and forgiveness lets find out its performance on that basis in comparison to the other sub-zero model. We compared this to Mavrik SZ which is the latest edition to Callaway drivers.

The data represented here is a standard deviation data of 10 strokes with each driver simultaneously with the help of the launch monitor. As you can see from here both the drivers cover a good amount of distance in total and there is not much difference between them. But when we look into the backspin Epic Flash SZ has a higher rpm than Mavrik Sub Zero. The ball speed and carry are almos t the same in both cases.

So, which one is better? The answer lies in your playing style. If you prefer more backspin epic flash sub-zero is still the best choice for you.


You will feel the difference once you have it. Features like long shots on mis-hits, forgiving, lesser spin, and launch than the previous rogue sub-zero might mesmerize you.

44 events winner including a PGA championship in 2005, Philip Alfred Mickelson, popularly known as ‘Lefty’ quoted after using Callaway Epic Flash drivers which includes sub-zero too that, “The ball speed, distance, sound…it just pushes the boundaries of everything I thought I knew about driver technology.“ Mickelson is an American professional golfer. He has five major championships: three Masters titles (2004, 2006, 2010), a PGA Championship (2005), and an Open Championship (2013).


Weight adjustability and the newly introduced AI designed Flash Face are the true advantages of the Callaway Epic Flash Sub Zero driver. It’s now easier than ever to optimize your ball flight while maintaining the signature low spin and launch of a Sub Zero head with the weight adjusting. Even in 2021, Epic Flash sub-zero will be preferable to many golfers with their kind of playing style. Faster ball speed with slightly higher spin and forgiveness.