What do the numbers on golf ball mean? 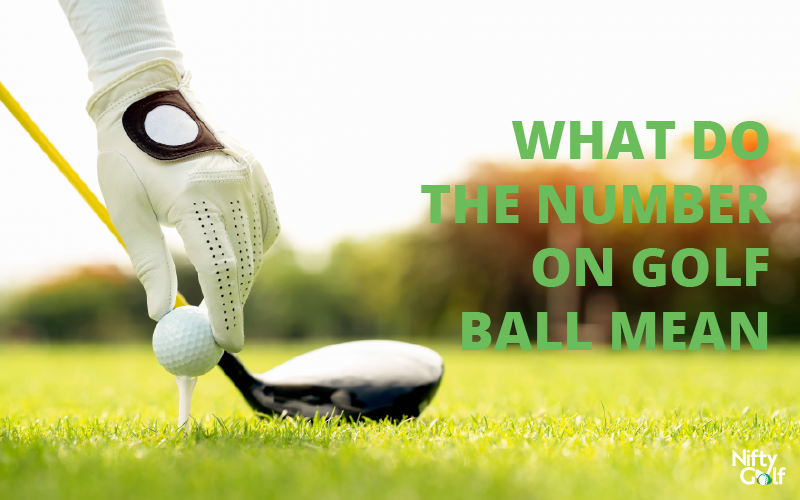 You take a golf ball in your hand and see if there is a number on the ball or you open the box of a golf ball and see that each ball has a different or the same number on it. Then naturally the question may arise in your mind as to what number it is and why this number has been used on the ball or whether this number has any special significance. If you want to know the answers to these questions, then you can read the following article.

A golf ball has the brand name above it and just below this name is a number above each golf ball. Everyone who has ever played golf, who has seen a golf ball in hand, or who has opened a box of golf balls, has seen that the golf ball has numbers on it.

People who make golf balls print one or more numbers on their golf balls. Different things are meant depending on these numbers, and the person who made these balls. The number of golf balls has many meanings, but in a word, it is used for identification purposes. These numbers are black or red. Although, at the present time this color does not indicate anything special.

Again, it is often seen on golf balls that three digit stamps are affixed such as 300 or 400. This number indicates how many dimples the ball has, although this is not a very important issue. But the single numbers that are on top of the golf ball are very important to golfers.

What Do the Numbers on a Golf Ball Mean?

For the convenience of golfers, numbers are used in golf balls in an easy way to identify golf balls. The type of golf ball was a few before, and their marks were not very different. So, it would have been difficult for golfers to identify their own balls.

Earlier golf balls were almost all the same, and most players played with the same type of ball. When different types of golf balls were introduced, it became easier for players to identify their balls.

Currently, some golf ball models are very popular. And a few golfers in the same group can play by picking the same golf ball. But if they have different numbers, then there will be a difference.

You May Also Like: Best Golf Ball For Seniors

Now we will know about how many types of digit numbers are used on top of golf balls:

The single digit number below the brand name in the middle of the golf ball is for identification. This number can range from 0 to 9. However, most printed numbers are usually 1 to 4. The main purpose of these numbers is to differentiate the ball of one player from the ball of another player. These numbers can help you play with the right ball. If you have to pay a fine while playing, it can help you avoid fines.

Most golfers again use the first letter of their name or some other sign for permanent identification. In that case if you have that number of golf balls then you do not have to follow alternative methods like others.

When you go to play you can see that you and two other players are playing golf balls of the same brand. In that case, the golf ball of this printed number would help you to differentiate.

The box containing the twelve golf balls is divided into four parts. Each section has 3 balls. Above a division there are three golf balls with ‘1’ digit and one more division of three balls with ‘2’ numbers.

The number above some golf balls is a two-digit number. Usually like 20, 30, 40 or 90.  When a golf ball has a double digit number, it usually indicates the rate of contraction of the ball. These are important decisions made by golf balls. Through this some strategies can be determined. These numbered golf balls are used by golfers with slower compression and are used for faster swings. In this case, the feeling of contraction is similar. The numbers 20 to 40 are referred to as a “ladies” ball and 70 to 80 are also referred to as a “ladies” ball in many cases.

Again some golf ball manufacturers use them to identify a few models of the ball. In this case, they usually use the ’99’ digit.

These digits (100,110) are commonly used for male golfers. By such a ball it is understood that the golfer has to swing hard if he is working properly. These are again known as “he-nam” golf balls.Those who are usually skilled players use hard core as their swing speed is fast. Although, this classification does not indicate anything important.

Players can choose abbreviations based on the level at which they play golf. Two-digit golf was very popular in the 90’s. But, nowadays these numbers are rarely seen as golf. In a word, modern balls do not have this number.

A lot of times you can see three-digit numbers on your golf ball. And this number can usually be between 300 and 500.This number usually indicates how many dimples the ball has. But keep in mind that the three-digit number of 100,110, indicates a compression rating. The number of dimples does not express the quality of the golf ball. Some manufacturers use dimple numbers on purpose.


Other numbers on a golf ball :

Many players prefer numbers printed on golf balls that have some personal meaning they have made themselves. Many people use any number to show respect to someone. A several uses the lucky number again. Some people print different numbers on the golf ball to remember their birthdays, wedding anniversaries, or special days. If you also want to have a number of your choice that has some personal meaning then, you can use it too.

Based on the above discussion, it is understood that golf ball numbers are used for identification purposes only.The numbers you see on the golf ball depend on what it means to you.The size, diameter, dimples, and design of a golf ball can vary. And these can affect the speed of a ball.