How to Begin a Perfect Golf Swing Takeaway 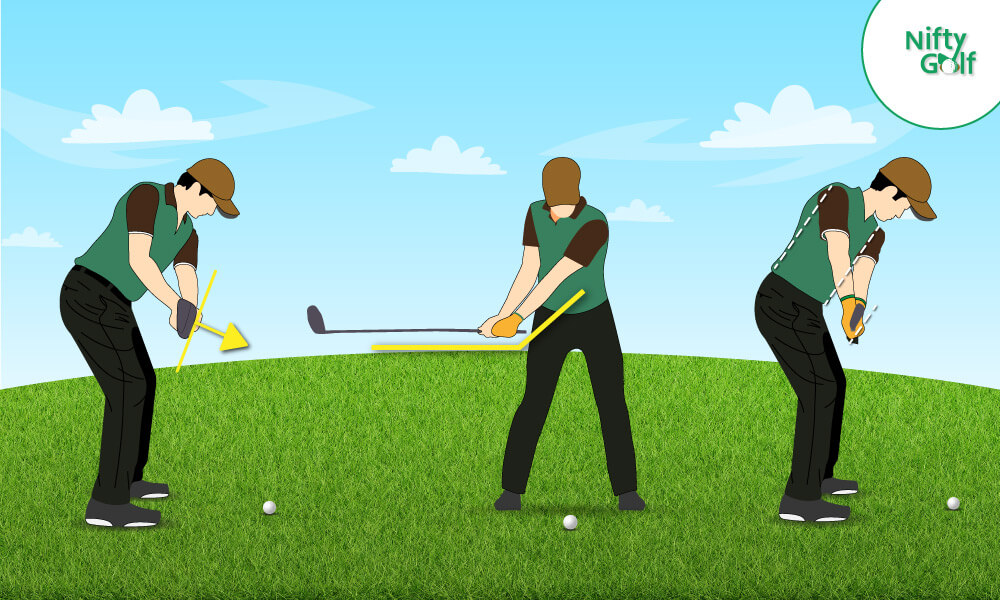 The takeaway is often an overlooked term for most golfers. A general reason is “a takeaway” is only a tiny part of a full swing. Beginners tend to focus on advanced concepts and drills to be game ready. What they don’t know is none can walk before learning to crawl. Likewise, none can learn proper stroke without learning about a takeaway. This article will go all the way into the golf takeaway concept and give different strategies to make them the most effective.

What is a Golf Takeaway?

A golf swing takeaway is the first movement of the golf club. It is the very beginning of your backswing. It is the first 12 inches in the club moving away from the ball.

This may seem like a small distance, but the destiny of your shot can be decided during the phase of your swing. Golfers that struggle to break 100 often have a critical breakdown in their golf swing takeaway. Once you make a mistake here, it’s hard to come back from it.

Even worse, it can create bad habits in other golf swing parts. For example, if you jerk the clubface to the inside during your golf swing takeaway, you will feel “stuck” and have to flip the clubface at impact to get it square to your target. Unless your timing is perfect, this will cause you to duck-hook the ball to the left or block it to the right.

Why Is the Takeaway Important?

An appropriate takeaway aligns the torso, hands,  arms, and club on the ideal swing plane. It is part of a backswing between the initiation and when the club gets parallel to the ground.

A misaligned clubhead during a takeaway can never make a shot to hit a ball in the correct direction, regardless of how effectively the remainder of that swing is done. The takeout drives your swing through the proper path from the very start, increasing the likelihood that the remainder swing will take the right plane.

Nervousness is the most common cause of starting with a bad takeaway. A tense man can’t harmonize between his hands and arms. He tends to dominate the takeaway with the arms first and tug their clubhead off the swing.

A takeaway done properly will sync the arms, hands, and body. It will resolve most issues that are usually liable for a failed swing.

You can perform a takeaway via several methods. Here are the most practiced two:

The one piece takeaway is defined by the triangle formed by the shoulders and arms at the address. Maintaining this triangle as you start your swing is vital to a successful one piece takeaway. This triangle established during your set-up should move as a single unit.  When wearing a Swing Align device, it is very easy to look down and see this triangle formed by the alignment rod across your chest and your arms hanging down to grip the club. The point of the triangle is where your hands hold the club.

A much preferable way to take the club back is by using the right arm to ” lift” the club via the right arm and letting the left arm come for the ride. As explained above, this incorporates more of a “pulling” force on the club, which allows it to remain in line with the path of motion that the hands take.

The right arm takeaway is largely controlled by contracting the right arm bicep. Like any proper takeaway, the club traces the “optimal plane” and preferably ends in the position shown in the picture above. The defining characteristic of this takeaway is the fact that the right arm is doing most of the work, and most will feel as if they are swinging the club with only the right arm. Of course, this isn’t the case, but is the intended “feel.”

Characteristics of a Perfect Takeaway

A perfectly crafted takeaway will offer a few distinct edges to you. Knowing about these edges or features will help you further attempt to create ideal swings. Here are a few notable ones:

How to Initiate an Effective Takeaway

You must have already realized that the magnificence of golf is unfathomable. The game consists of many distinct components, each of which plays a function. Your legs represent the longest muscles in the body and contribute to power production. Your waist and hips generate speed, while the forearms contact your wrist hinge, resulting in a massive energy transfer.

All these functions of different muscles have unique roles to play during a takeaway. It’s crucial to place and twist them as necessary. Here is a guideline for using different components to create the perfect takeaway:


1. Point the Shaft at the Target

The club must be aligned with the target during a takeaway. You should ensure that the club’s shaft and the ground are parallel. You should also point the club straight forward along a line parallel to the target line.

2. Lean the Clubface Slightly toward the Ground

When a takeout ends, when the shaft of the club gets parallel to the ground, the clubface position and direction it faces are both important.

In point of fact, for shots that are airborne with extreme force and follow a straight path, the dominant edge of clubs should lean slightly towards the ground and the ball. This will allow these shots to pierce the air with the possible vigor.

Ideally, the club shaft should be parallel to the ground because the shoulders rotate away from your body. This contrasts with the clubhead coming higher rapidly via a wrist bend, which is undesirable for most regular strokes.

Like every other game, golf has small components. For golf, these small components will be golf swing, alignment, position, set-up, takeaway, and so forth. Often underestimated individually, these components are the prime factors for a dead straight stroke and better performance.

As of now, put some time and effort into replenishing your takeaways. You will be amazed by the improvement a perfect takeaway brings to your swing.